In 2023, Rolling Ridge celebrates 75 years of ministry. Woo-hoo! Every month this year, we plan to share a story reflecting the impact Rolling Ridge has had and is having on people. The Ridge is in the business of transforming lives and helping people find what they need. We begin this series (on the fourth Tuesday of the month) with Michael Reed, who has joined our staff as the new Associate Executive Director. Michael will also be our primary storyteller for this series. We hope that you will enjoy his personal story of how radical hospitality has transformed his life. If you have a story to share, please let him know.

There’s a famous old bookshop in Paris that I have been fortunate enough to visit. Tucked away on the Left Bank of Seine, Shakespeare & Company is everything you want in a bookstore. Its warren of rooms are built at odd angles into the yellowing bones of a 17th century building, with twisting corridors and unexpected staircases and shelves—shelves in every conceivable place—full-to-overflowing with books. Over one of the doorways, in hand-painted letters, is the motto of the place: “Be not inhospitable to strangers, lest they be angels in disguise.”

The Shakespeare and Co Bookstore. Photo courtesy of Dawn Danby.

I stopped and stared when I first saw those words. They’re from the Bible: Hebrews, chapter 13, verse 2. I think about them often, even still. They seem to fit the pattern of my three-and-a-half decades of life, and the principle I wish to live by for the rest of my days. They also are a fitting mantra for Rolling Ridge Retreat Center, where I’ve recently come on staff as Associate Executive Director, as well as all of us who profess to find our spiritual center in the Christian contemplative tradition.

The author of Hebrews, who originally wrote those words, was probably recalling a story about Abraham. Abraham scurries around preparing food and footbaths for three unexpected visitors who are passing by his tent. It’s a good thing he does, too, since the visitors turn out to be angels, or (in later Christian tradition) representations of the Trinity, or else angels accompanied by the preincarnate Christ. Abraham’s reputation is solidified for millenia to come: as the Bible’s consummate host, welcoming strangers to his table, and the one who welcomes all people to God’s great feast at the end of the age.

I love this idea—the thought that you or I or wizened old Abraham might suddenly find ourselves entertaining the angels, perhaps without knowing it. Perhaps the people we meet are far more mysterious—and indeed, far more glorious—than we first supposed. And perhaps it reminds us of times that we have been strangers, and others have taken us in, treating us as if we were a member of God’s heavenly host—which is to say, far better than we deserved.

I came to Rolling Ridge because my life has been changed by just this kind of radical hospitality. In my twenties, I moved to Scotland to attend graduate school. Spiritually adrift from the evangelical faith of my childhood, I found myself staying in a Christian guest house. The resident staff fed me warm scones with jam, invited me to evening prayers, pronounced in solemn Scottish brogue, and asked me the sort of subtle, provocative questions I now recognize as the ministry of deep listening. It worked.

The Emmaus House in Edinburgh, Scotland

Later I found myself passing through another guest house for a few weeks, this time in Vancouver, Canada, to study the Rule of St. Benedict. Living there was an intentional Christian community of resident scholars and activists, who welcomed me and showed me their rhythms for faith and life. There was a prayer that they lived by, written by the Northumberland community: “Christ, be in the heart of each to whom I speak; be in the mouth of each who speaks unto me.” The prayer draws inspiration from Matthew 25, where Jesus pronounces that he will always be found with the humble and poor of the earth. “I was a stranger,” Jesus says, “and you invited me in.”

More recently, and now a pastor in the United Methodist Church, I found myself in Trenton, New Jersey, starting The Maker’s Place, a nonprofit ministry with and for people living in poverty. Our focus was on families with young children, supplying material necessities and receiving each person as if they were Christ. To underscore the point, I sometimes told our leaders a story about a woman in a homeless shelter, herself unhoused. She would welcome each person with a huge hug as they came through the door. It got to the point where she was slowing down the intake line. The shelter’s staff asked if she might try hugging only a few people each night. “How can I?” asked the woman. “I don’t know which of them is Jesus.”

Here’s what I’ve found, as I have wandered like Abraham looking for a promised place to land: whenever radical hospitality and spiritual awareness go together, you discover angels in disguise. You discover Christ in the heart of each person you meet.

That’s what Rolling Ridge is all about. For seventy-five years, the Ridge has been a place of gracious hospitality and spiritual transformation. I’ve been getting to know its stories—and interviewing the people behind them. Over the twelve months of this anniversary year, I’d like to share some of them with you. Each month, we’ll look for ‘angels in disguise,’ as we encounter lives that have been changed over the last three-quarters of a century. Rolling Ridge has been a place where people have found healing; found love; found courage to overcome their fears; found a new calling; found their true selves; found God. When we’re done, we’ll compile them into a book, available for pre-order at our 75th Anniversary Celebration on September 24, 2023. 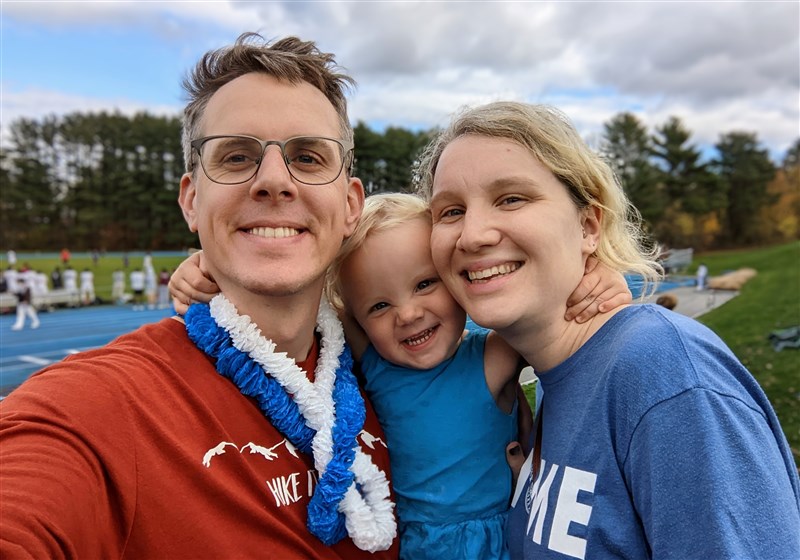 Michael with his family in Andover, MA

When I first came to Rolling Ridge, something about the warren of rooms in this beautiful old manor house reminded me of that bookshop in Paris, and its warning about angels in disguise. I was reminded of that quaint guest house in Scotland, the residential collective in Canada, and all the places around the world where people gather in intentional community to bear witness to the living Christ, and extend radical hospitality to each and every person who passes through their door.

Those are the places that have changed my life. Those are the places that can change the world, one life at a time. Rolling Ridge is one of those places. I hope you’ll join me, by reading along with this special email series. In the stories of Rolling Ridge, we’ll uncover the divinity of earthly things, and a better future to which God is calling us, as we show hospitality to friends and strangers alike.

Rev. Michael Reed is the Associate Executive Director of Rolling Ridge, and an ordained Elder in the United Methodist Church. He and his family moved to Massachusetts in 2021, when his wife became an Instructor at Phillips Academy Andover. Michael is passionate about the collective practice of Christian spirituality, especially through the teachings of Jesus. Reach out and say hello at michael.reed@rollingridge.org. 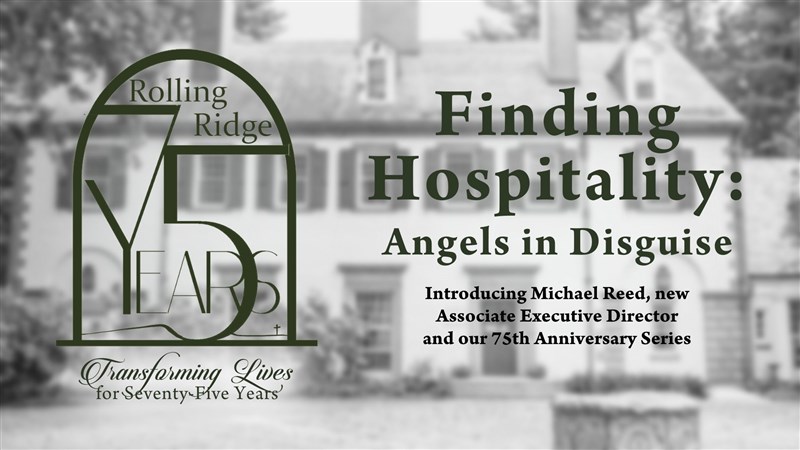