Since 1948, Rolling Ridge Retreat and Conference Center has been a ministry of hospitality and spirituality of the New England United Methodist Conference, and open to diverse faith communities, not-for-profit organizations, schools, civic and corporate groups for meetings, events, and overnight retreats.  Nestled on 38 acres overlooking Lake Cochichewick in North Andover, Massachusetts, Rolling Ridge is a perfect place for individuals and groups who seek a time of rest and reflection, and who desire peaceful surroundings for fellowship, planning, and learning. 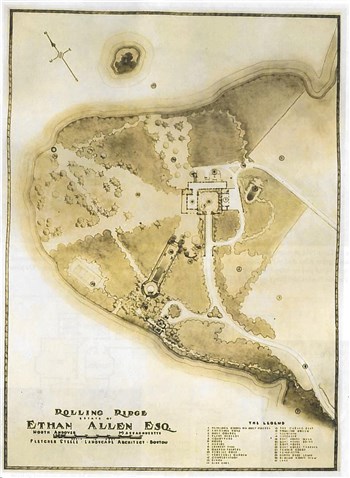 Originally built as a summer home for Ethan Allen, a wealthy New York wool merchant, who purchased the property in 1899.  He eventually made plans to develop the gently rolling peninsula in 1915 when he hired landscape architect, Fletcher Steele, and architect, Andrew H. Hepburn.  Allen wanted Steele to layout the whole property and build the gardens first to take advantage of the trees and views so that Allen could walk out on finished grounds the day he moved in.  The lawns, house, gardens and garage were all planned “properly related to the others.”

Though the landscape work began earlier, construction on the grand estate began in 1919, and was essentially completed in 1923.  Little is known about the years after construction, but in 1928, Rolling Ridge was sold to Russell Tyson, a Harvard graduate and a successful Chicago real estate broker.  Tyson kept Steele to advise and maintain the grounds, and in 1935 Rolling Ridge was awarded the Hunnewell Medal by the Massachusetts Horticultural society.

In 1948, Tyson sold the property to the New England Conference of the Methodist Church. 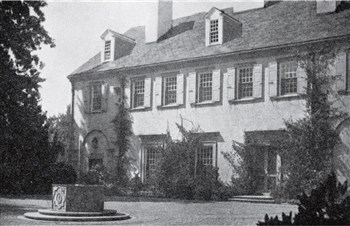 On a pastoral visit to the caretaker of Rolling Ridge, Rev. Ralph York, pastor of North Andover Methodist Church, learned that the charming 38 acre estate of “Rolling Ridge” was for sale.  Hearing York’s dream of an Annual Conference Center, the Bishop John Wesley Lord visited the property.  Though he thought it “a bit ambitious,” he discovered interest and appointed an investigation committee to conduct a feasibility study.

Negotiations with Russell Tyson began slowly.  When Tyson agreed to take $20,000 off the asking price in exchange for naming the living room, Tyson Hall, the Rolling Ridge Commission purchased the estate for $55,000.  Bishop Lord consecrated Rolling Ridge as a Methodist Retreat Center on October 2, 1948 calling it a “Venture in Faith.”

Immediately, work was begun to convert the private residence to a conference facility primarily for youth.  Funding came from many churches, including women’s groups, youth groups, and the fundraising efforts of lay people who served as leaders at the Ridge.  The guesthouse/garage was converted into a downstairs meeting room and upstairs a boy’s dormitory was built through gifts from the Horace Moses Foundation.  Hence, the building acquired the name “Moses”.

The first youth institutes were offered in the summer of 1949 with Gil Taverner and Ralph York as some of the early leaders.  In 1954, construction began on an expanded dining room to seat the growing numbers.  The new dining room was named in honor of the benefactor’s wife, Teresa B. Beveridge, whose picture graces the hall of the Main Wing.

A new, nearly Olympic-sized swimming pool was built in 1956.  In 1959, an extensive fund drive, “The Miracle of Rolling Ridge” raised over $117,000 to reduce the mortgage, pay off other loans, and allow for property improvements.  Through funds from the sale of a house in Gloucester, the director’s home was built in 1960 and in 1963 a bath house/apartment was added for the Ridge caretaker.

Along with children summer programs and adult spiritual events sponsored by the New England Conference, during the 1960’s, the Ecumenical Institute of Chicago used Rolling Ridge as a teaching center.  To refocus the direction of the Ridge, Rev. Frank Kooker was hired by the Conference Commission of Education to oversee programming as Director of Camps and Conferences, with Rev. David Hollenbeck as resident manager.

In 1976, the two functions of program director and facilities manager merged under the leadership of Rev. Jim Todd who continued the tradition of youth summer programming at the Ridge .  This continued into the early 2000s.

With a decline in youth programming, the decision was made to transition Rolling Ridge from a youth facility to an adult retreat center.  Beginning in 2005, Rev. Larry J. Peacock spent a decade renovating the facilities and renewing the programming. Building on this foundation, Rev. Dr. Lawrence Jay began in 2017 and is leading the Ridge into a new chapter of ministry and mission.