This series title draws its inspiration from a quote by the great 16th century Spanish mystic, Teresa of Avila, who described contemplative prayer as “a close sharing between friends”.

Alan Dillingham, a former university professor and avid reader of Christian classics for over forty years, will facilitate this series, which will be held on the second Monday evening of every month from 6:30 pm to 8:00 pm. Alan will facilitate the first part of each session by selecting a few key passages for the group to review, with commentary and background information on the author and the text. The second part will be a period of reflective conversation by group participants.

Our first session on Monday, June 14 will look at Augustine’s Confessions. Augustine lived from 354 to 430, during the late Roman Empire and his writings greatly influenced the development of Western Christianity. His Confessions are in the form of a sustained prayer to God, reflecting on his conversion to the church.

Our second session in July will examine The Imitation of Christ by Thomas a Kempis. Thomas a Kempis lived from 1380 to 1471 and spent most of his life quietly copying bibles in a Dutch monastery. The Imitation of Christ takes the form of a handbook for spiritual life and is perhaps the most widely read Christian devotional book after the Bible, influencing Ignatius Loyola and John Weley among many others.

Our third session in August will explore Introduction to the Divine Life by Francis de Sales. Francis de Sales lived from 1567 to 1622. He was a Catholic bishop of Geneva during the Reformation, and was noted for his gentle approach to the religious divisions of his day. Introduction to the Devout Life resulted from letters and notes de Sales used for spiritual direction, and gently insists that the pursuit of holiness is open to everyone regardless of their station in life.

Although there is no fee for this program, your generous donation to assist Rolling Ridge during COVID is greatly needed and appreciated. Thank you. 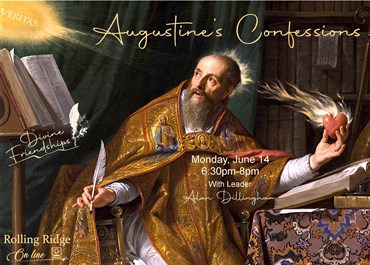